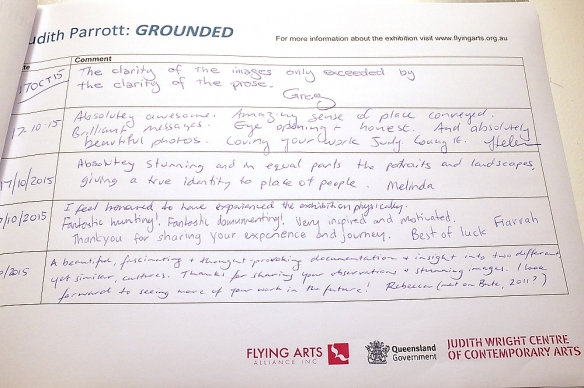 More feedback from the comments book in Brisbane can be viewed via this link: Comments from Grounded at Judith Wright Centre of Contemporary Arts. And for a small selection of the feedback from the same show in Glasgow, during Festival 2014, XX Commonwealth Games, you can find comments here.

Brisbane was the second venue in a tour of Grounded to 12 galleries in Australia by Flying Arts Alliance Inc. (The current touring schedule is at the end of this post, with a couple of spaces still available for bookings from end 2017.)

For those new to the blog, the Grounded exhibition, a commission by Glasgow Life for Festival 2014 XX Commonwealth Games, has also shown since at An Lanntair Art Gallery in Stornoway, Isle of Lewis, as a partner event at Hebtember Festival.

The Colour of Language arts educational project came out of Grounded’s showing at An Lanntair in Stornoway, Scotland. The Colour of Language frieze is growing and now almost big enough to cover a wall at An Lanntair Gallery in Stornoway, with the latest additions by some children from Hazelwood North school in Gippsland, Australia. If you are interested in joining in you can contact me through this blog here.

The story of my time in jail in Alice Springs, subsequent lack of conviction in court, and implications of this story for the local Aboriginal population, can be linked to here. Then here for the court process following arrest. And a response to the Alice Springs jail post by Professor Smith can be found here.

Three audiovisuals that were part of Grounded, (Wadlu-gnana; Freumhaichte; Who Cares for Country) can be watched here

Educational workshops run at An Lanntair Gallery in conjunction with Grounded can be viewed here and here.

Joe’s educational video of me talking about the exhibition can be viewed here.

Photos of the Glasgow opening event are here. Glasgow workshops, talks and exhibition details are here. And the Digital Resources pages of the blog for further information are here and here.

An interview about my work with journalist Jim Gilchrist is on the Struileag website which can be read at Jim Gilchrist’s review or linked to here.

A review by Dr Kate Robinson can be found here. And you can listen to a cut down recording of “In Conversation: Connecting through Culture” at this Vimeo link. (16 mins.) (One of our afternoon events at Glasgow Festival 2014 showing). Or listen to some music from one of our Glasgow afternoon events here.

A radio interview with BBC Radio Scotland Voices of the Commonwealth, which explores some of the concepts behind Grounded, is now available for listening to here.

The introductory page for the blog can be found here.

The Grounded residency diary entries begin here in Scotland and then in Australia here. This is a record of my thoughts whilst gathering the material. These thoughts and images inform the production but are not part of the final exhibition.

Some other sites that link to Grounded can be found here

Funder acknowledgements can be viewed here