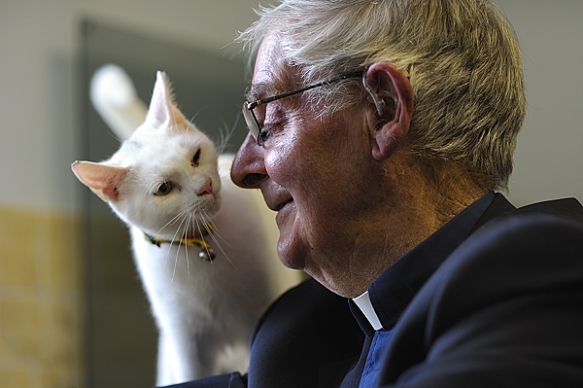 The rain is scouring the Uists with horizontal needles, blasted in one raging gust after another from across a swollen Atlantic. One icy exhalation sweeps in, then a brief pause as the lungs of the sky are filled again, in readiness for the next wave of sharper, faster needles of rain than the last.

I am journeying to Barra today – across the causeway from South Uist to Eriskay, traveling the single track road that dips and swells around Eriskay’s coast, to the pier where we catch the ferry for forty minutes over a heaving sea to Barra.

I am going with Neil in his parcels van. He has 80 parcels to deliver to Barra. Deliveries there are Tuesdays, Thursdays and Saturdays. Some days I deliver the dresses from the catalogues for the ladies, he says, if there is a dance on that night. And the next day I take them back again – wrong size. It keeps you in business, I laugh.

We drive onto the little ferry, and I am buried in parcels on the passenger’s seat, around my feet and balanced on my lap and between us, and all around. The ferry heaves her way into the wind, over a steely grey swell and into a thick veil of dripping cloud. But even so, when we pull into Barra harbour I can see how beautiful she is. The Jewel of the Hebrides, they call it. And despite the heavy lead skies the water is still a cool clear green on white sand beaches, the worn hills lumping and bumping to the shore.

We deliver a few parcels, ducking in and out of the rain, pulling open doors and dropping each parcel inside, before I am delivered to my first port of call with Calum McNeil, and welcomed with warming tea.

Calum is an encyclopaedia of knowledge and history, as are so many here that have lived the stories that they tell. He is also a fisherman and meets my idea of a photo at his fishing boat with an easy smile. We head out once more into the weather, down the garden path to his little boat bobbing at the shore. I am pleased that before I left for the Hebrides I bought an Elements Cover for my camera, and this is my first opportunity to put it well and truly to the test. We slip over wet rocks and make the small jump onto the boat’s deck. I ask Calum to stand in the doorway of the tiny wheelhouse and I scramble amongst the ropes and the slippery wooden planks to position my tripod and my camera in the clear plastic covering, pulling its sleeves over my wrists to operate the camera in the dry security of the cover. All the time I am battered by wind and driving rain and in the back of my mind I am registering what an exhilarating style of photography this actually is. But we don’t waste too much time out here, as the rain gathers and pools around us, dripping off our noses and sliding down our necks, and soon we are back over the edge of the boat and making our way up the path to the house once more.

Back at the house, Calum talks of his childhood and sketches a beautiful picture on my mind’s eye:

“ I was brought up beside the sea and the shore, that was our playground. Even the girls would play at the shore. They would have a make-believe house made up of jam jars and broken crockery. We used to sail small model boats that were made out of dried milk tins, opened and flattened and turned into boats by the older boys. We would sail them along the shore on a piece of string, especially when the tide was in because you didn’t have to slip and fall on the seaweed. We looked forward to the high tide every day”.

His imagery reminds me of a small moss-green wooden boat with a cream sail that my sister and I used to pull along the pebbly shore line of Broughty Ferry, by a piece of worn old string. The taste of salt and seaweed and the stickiness on my skin are instantly back with me; the blue and white cotton frock that my mother sewed for the soft Scottish summers.

It is early afternoon when Neil comes back in his van to collect me and deliver me to my next port of call, Canon McQueen.

At ninety-two, Canon McQueen is spritely and agile, and full of twinkle and life. It is clear that he loves life; and his snowy cat, Mizzy, that purrs around him as we speak. His other cat, Fionn, is named after one of the great Celtic Heroes and guardians of the Celtic people.

Canon McQueen is full of the Gaelic ways, recounting the freedom of life at the shielings as a child, never needing to come home for a meal as he knew which grass he could chew, which berries to pick, which birds he could catch at the shore; never wanting for food as he roamed the hills and the moors. Gaelic is the language of the hills and the birds and the sea, he says. You just have to sit on a hillside and you can hear the language formed in the breeze. “I was taught as a little boy that the ocean speaks, and the Hebridean ocean has much to tell”.

It seems no time until Neil is back again to collect me in his van, but the day is nearly passed and we have a ferry to catch. It has been a day of such warmth under a sky that tried in vain to make it otherwise.